Novinky a akceProběhlé akceInvestigation in between literature and science: the epistemic effectivity of science-fiction
Sdílet
Semináře

Investigation in between literature and science: the epistemic effectivity of science-fiction

Online seminars are organized through Zoom. Registration is required in https://docs.google.com/forms/d/e/1FAIpQLSdNTpz4yBOlSHw7RcYpOIzLqTTD8tfV... 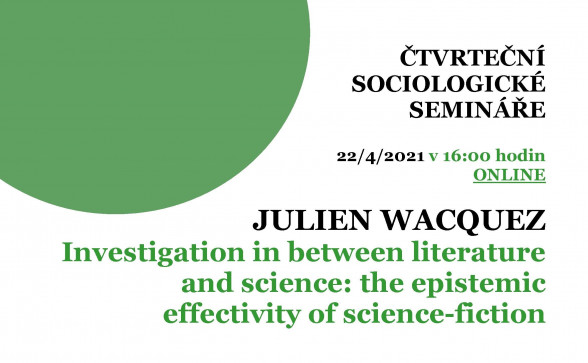 This presentation takes sociology to a field of study that has been neglected until now: science fiction literature. Rather than understanding it as a dominated subspace within the literary field, or describing it as a cultural good whose sole purpose is the production of a market value, the chosen approach seeks to account for its ambivalence—which can be detected in the category of "science fiction" (sometimes spelled as "science-fiction") itself, in that blank space or that hyphen placed between two words that seem to entertain an op-positional relationship. How should we read this small typographic character? As a recognition of the clear separation between two pre-existing entities - on the one hand science and on the other fiction - or rather as a will to deny it or, perhaps, to go beyond it?

Julien Wacquez is a sociologist currently affiliated with the Labex les passés dans le présent at the university of Paris Ouest Nanterre, France, as a postdoctoral research fellow. His research focuses on the epistemic values of science fiction literature and the scientific uses of science fiction through history. He published several articles which appeared in journals of sociology (Socio), anthropology of arts (Gradhiva), and comparative literature (Modern Language Notes). Since 2014, he is the editor-in-chief of the online magazine Angle Mort, which has been honoured as the 'Best European Science Fiction Magazine' by the Eurocon Award 2018.

Online seminars are organized through Zoom. Registration is required in order to receive access information. Link to the registration is available HERE.