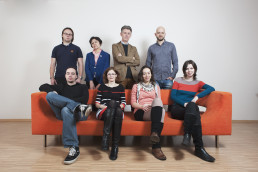 The department of Political Sociology focuses on the systematic study of the basic processes in the democratic political system of the Czech Republic and some of its bodies. Attention is also paid to the social changes in contemporary Czech society, the nature and determinants of political activism, and sociological aspects of security such as the relationship between security and freedom.

The department is involved in the boards of international research networks and several international projects. Members of the team also organise election surveys as part of two international networks: the Comparative Study of Electoral Systems (CSES) and the European Election Study (EES).

Dynamics of change in Czech society

Principal investigator: Pat Lyons, B.A., M.A., Ph.D.
This project (GA ČR, centre of excellence project) will examine the dynamics of change in Czech society using a household panel survey research design. Applying insights from sociology, economics and politics this study will examine five themes: family life, time use and income management; education and the labour market; social strati cation; housing choices and inequalities; and political participation and civil society. Within the framework of a Household Panel Survey, theories and models of many facets of social change will be examined using individuals’ attitudes, preferences and behaviour within the context of the household. This project will both chart the process of social change and contribute to the training of the next generation of Czech social scientists.
Time of researching the project: 2014 – 2018

EUENGAGE - Bridging the Gap between Public Opinion and European Leadership: Engaging a Dialogue on the Future Path of Europe

Project financed by Horizon 2020 European Commission framework programme. The aim of the project is to investigate the views of European political representatives on the current state of European integration. The survey focuses in particular on the views of members of national parliaments such as you on the ability of EU institutions and policies to face effectively the current economic, security and immigration crises and on their expectations about future scenarios.

A Czech-Bulgarian Joint Research Project (PPP project), together with the Institute for the Research of Societies and Knowledge, Bulgarian Academy of Sciences, Sofia. The objective of this project is to try to assess the contemporary state of the rule of law and good governance in two countries – Bulgaria and the Czech Republic. On the grounds of analysing the characteristics of democracy these two countries are facing nowadays, the project seeks to identify and present a model for the key mechanisms that link citizens and politicians in a good governance democracy, and to show the empirical varieties of misrule of law in the last more than 20 years.

The goal of SOCONOMICS (FP7, project 285223) was to synthesise sociological, economic and security science into usable, concrete, actionable knowledge for policy-makers and social planners responsible for citizens' security. The project was based on industry case studies and specifically identified security threats in transport (air, urban and super urban metro) and critical infrastructure. The project contributed to developing and furthering the state of the art in modelling security problems in a technological and socio-economic context and applying state-of-the-art risk assessments and analysis of the social context to develop optimal policies.

Time of researching the project: 2012 – 2015
www.seconomicsproject.eu

The Europeanization of Trade Unions in the Countries of the Eastern Enlargement. Perspectives for Interest Representation by Trade Unions and for Trade Union Solidarity within the EU

Principal investigator for the Czech Republic: PhDr. Zdenka Mansfeldová, CSc.
The research project analyses the integration of trade unions from the countries of the EU´s Eastern enlargement into EU governance structures. Additionally the project wants to establish which strategies the trade unions follow in their EU-related activities and how they develop these strategies. Project coordinator: Heiko Pleines, Research Centre for East European Studies, University of Bremen, Germany.
Time of researching of the project: 2012 – 2014

The Origins, Nature and Impact of Political Knowledge

Aim of research stay:  the purpose of his visit was to pursue research about nationalism in Europe

Peter Tunkis is a Ph.D. Candidate of political science at The Ohio State University in Columbus, Ohio (USA) and a 2014 Fulbright-Hays Fellow, in affiliation with CONSIRT (Cross-National Studies: Interdisciplinary Research and Training Program, consirt.osu.edu). Peter specialises in Comparative Politics and Political Psychology, with research interests in political parties, legislator behaviour, Central and Eastern European politics, as well as European Union politics. His dissertation focuses on the relationship between inter-party mobility (changes in party affiliation) and the nature of group linkages, personal identities, and group dynamics between legislators in new democracies, with a focus on Poland and the Czech Republic since the end of Communism. Peter holds a B.A. in Political Science and European Union Studies from the University of Florida, Gainesville (USA) and a M.A. in Political Science from The Ohio State University.

Aim of research stay: While affiliated with the Institute of Sociology, Peter is conducting fieldwork for his dissertation. This work includes interviews with current and former Czech parliamentarians and the collection of novel data on the activities and affiliations in the parliament (1993-2013). His research is being funded with the help of a Fulbright-Hays Doctoral Dissertation Research Abroad Fellowship.

Political Knowledge in the Czech Republic