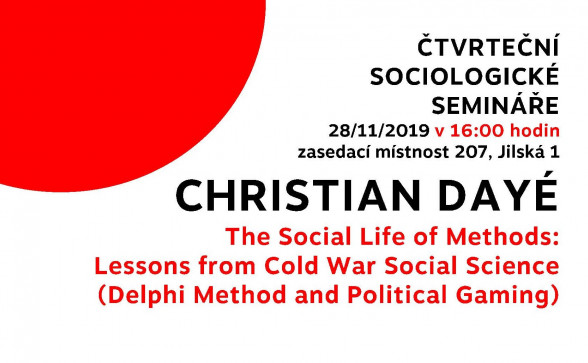 In the recent decade, historians and sociologists of science have shown an increasing interest in methods of social knowledge production (Camic, Gross, und Lamont 2011; Igo 2007; Savage 2010; 2013). Methods, it has been amply shown, are strategic research materials of high value. In abstract terms, they are, on the one hand, manifestations of very fundamental, yet potentially idiosyncratic beliefs about how society is or should be structured. On the other hand, once established, they also help to spread these beliefs across the respective societies.

The talk will assess how these mechanisms played out in the invention and development of two different social scientific techniques of prognosis, the Delphi technique and Political Gaming. Both were developed around the same time – the mid-1950s – at the same research organization – the RAND Corporation, a US think tank with close relation to the Pentagon and the armed forces. Nonetheless, the two techniques differed considerably. The talk will trace these differences in the social life of the techniques: they were created by people with different philosophies, competences and worldviews, and these continued to inform their trajectories for the coming fifty years.

Christian Dayé is a sociologist with research interests in science, knowledge, ethics, and politics. He received his PhD in 2012 from the University of Graz and was a post-doctoral university assistant at the University of Klagenfurt, Austria, before joining the Science, Technology and Society (STS) Unit at Graz University of Technology. He received the 2012 Young Scholar Award of the Research Committee History of Sociology of the International Sociological Association. His monograph, Experts, Social Scientists, and Techniques of Prognosis in Cold War America (Palgrave) is scheduled to appear in early 2020.