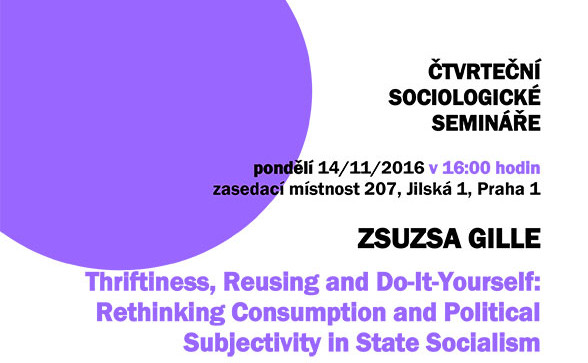 The purpose of this talk is to reinterpret what we know about consumption in eastern Europe based on new developments in the sociology of consumption and political theory. Countering the narrative that backwardness and chronic shortage logically leads to a pro-capitalist individualist subjectivity, I will instead reconceptualize socialist-era consumption practices and demonstrate that the dichotomy of production vs. consumption, taken for granted in the study of western consumer societies, don’t exist in the same register in eastern Europe, and thus that recent alternative consumer movements and the phenomenon of prosumption existed already in centrally planned economies. Central in this field of practices were various saving rituals and DIY (do-it-yourself) activities that I will illustrate with Hungarian examples. What this implies for our understanding of the relationship between political subjectivity and consumption will be illuminated with William E. Connolly’s concept of the ‘resonance machine’.  In the end, I would like to open up a debate about what this means for how we view current economic discourses about prudence and economic morality.

Zsuzsa Gille is Associate Professor of Sociology at the University of Illinois at Urbana-Champaign. She is author of From the Cult of Waste to the Trash Heap of History: The Politics of Waste in Socialist and Postsocialist Hungary (Indiana University Press 2007—recipient of honorable mention of the AAASS Davis Prize), Paprika, Foie Gras, and Red Mud: The Politics of Materiality in the European Union (Indiana University Press 2016), co-editor of Post-Communist Nostalgia with Maria Todorova (Berghahn Press 2010), and co-author of Global Ethnography: Forces, Connections and Imaginations in a Postmodern World (University of California Press, 2000). She was the special guest editor of Slavic Review’s thematic cluster on Nature, Culture, Power (2009). She has published on issues of qualitative methodology as it relates to globalization and new concepts of space, on environmental politics and on the sociology of food.