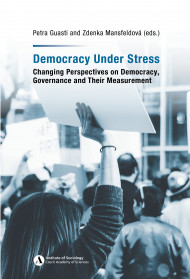 Democracy, defined as liberal pluralism, is under stress worldwide. Pluralistic democratic institutions: a free press, civil society and the rule of law all seem to be under attack. Democracies are being hollowed out from within while preserving the fundamental facade of elections.

The strength of this book is in providing a range of perspectives on the study of democracy under stress. The authors, renown scholars of democratic theory and democracy in the Central and Eastern Europe, highlight the potential of different approaches – from comparative meta-assessment using indices and survey data, to case studies focused on understanding context and causal processes – for a better grasp of the loci of the stress.

Together, we offer the reader the opportunity to assess different conceptual frameworks and approaches, to reflect on their strengths and weaknesses, to advance the study of democracy in the future. This volume is also an invitation for scholars to redirect their attention to the Central and Eastern Europe, which offers an opportunity to deepen our understanding of democracy.

We see the democracy in Central and Eastern Europe under stress but avoid general labels such as the crisis of democracy and deconsolidation. Instead, we argue that to understand the contemporary situation in the CEE region, we need to move beyond the assessment of institutional frameworks and to include citizens in our understanding and measurement of democracy.

The book is released on 21th December 2018. All sales will be processed in the first half of January.