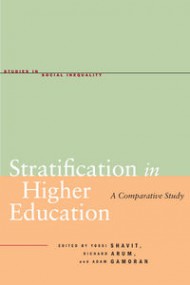 The Czech Republic: Structural Growth of Inequality in Access to Higher Education

The chapter addresses a hypothesis according to which inequality in access to higher education did not decrease during socialism, while it has grown during the post-communist transformation. The analysis revealed that the only significant change that occurred during socialism was a decrease of inequality between men and women. It also confirmed a significant growth in the effect of class background on the odds of making the transition between secondary and tertiary education after 1989.