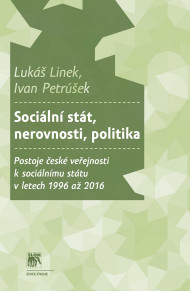 Welfare State, Inequalities, Politics: The Czech Public’s Attitudes towards the Welfare State between 1996 and 2016

Western academic research on support for the welfare state and its development over time has been framed (since the 1970s) by theories that have sought to address the growing size of the welfare state and the increasing inability of states to fund new public services. Theories of government overload and the legitimacy crisis of late capitalism have argued that western populations have placed ever increasing demands on their governments that states are not able to satisfy. Other academic literature has also discussed the influence of post-materialism and the growing public opposition to taxation levels and the size of the welfare state (‘the tax-welfare backlash’).

In the Czech Republic, public experience and the initial situation in the 1990s were significantly different from western countries. Before the transition from communism to democracy (which started in the early 1990s) all social and public services were delivered by the state free of charge. The state also provided people with work and regulated wages and the prices of goods and services. Social services were moreover provided universally under communism. The transition from communism to democracy was framed as the need to substantively reduce the state’s role in the economy and public welfare provision. This is the opposite of the trend that is discussed in Western literature. Social services (housing, health care, education) were privatised (at least to some extent), and market principles were applied to their provision (e.g. the insurance principle in pensions and unemployment benefits; the rise of private providers of education).

Nevertheless, an influential report on the development of Czech society in the 1990s (Večerník and Matějů 1998: 185–196) highlighted the Czech public’s overwhelming preference for a social market economy. This preference was associated with the demand that the state play the key role in the provision of health care, pensions, housing, and price regulation and in reducing rising income inequalities (similarly see Matějů 2000). Consequently, the first research question pursued in this monograph is whether public attitudes towards the role of the state in social services provision changed during the consolidation of the new political and economic system in the late 1990s and the 2000s. Citizens of post-communist countries generally favour a more significant role for the welfare state than citizens of most Western European countries.

The authors’ analyses confirm the dominant public perception that the state should play the primary role in welfare provision. Almost the entire Czech population thinks that the state should provide universal social services, such as pensions, health care, and education, and Czech society uniformly agrees that government spending on these services should be increased. A slightly smaller share of the population, about three-quarters, support the state provision of selective social services aimed at people in need. Also, about two-thirds of the Czech public support government income redistribution from the rich to the poor and progressive taxation. In general, most of these attitudes are very stable over time and their aggregate levels in the second decade of the 21st century were almost the same as they were in the mid-1990s (aggregate support for universal and selective services varies by only a small number of percentage points). The welfare state thus enjoys pronounced support among the Czech public.

Nevertheless, time series analyses in Chapters 3 and 4 indicate that support for income redistribution and progressive taxation was significantly more varied over the course of the period analysed and differed by as much as 20 percentage points. This aggregate variability was closely related to the business cycle. In times of high unemployment, declining GDP, and lower tax revenues, support for redistribution and progressive taxation was strongest. This common pattern of association between the economic context and these specific attitudes towards the welfare state, which has been observed in many studies of Western European countries, was also confirmed in the Czech Republic.

Research from the second half of the 1990s demonstrated the gradual crystallisation of socio-economic status in the Czech Republic (Matějů and Kreidl 1999). This crystallisation of status means that the link between education, income, and occupation has strengthened over time. When there is status consistency, people with higher educational attainment work in managerial positions or positions that require high expertise and skills and are thus highly paid. With growing status consistency, the relationship between socio-economic status and attitudes towards the welfare state should become stronger over time (assuming that people's attitudes are at least partly driven by the pursuit of self-interest).

Somewhat surprisingly, the relationship between socio-economic status and attitudes towards the welfare state was the strongest in the mid-1990s, and since then the strength of this relationship has decreased significantly. Overall, the authors’ analyses demonstrate that attitudes towards most aspects of the welfare state are only weakly related to socio-economic status, regardless of whether the status is measured by education, type of economic activity, or income. In the case of universal services provision, there were almost no  differences by income or educational attainment groups (this is the result of ceiling effects, since the public provision of universal services is supported by almost the entire Czech public). Attitudes towards income redistribution and the provision of selective services are weakly linked to socio-economic status. As both redistribution and the provision of selective social services benefit lower-status groups more, it is logical that support for these services is stronger among lower-status groups. Conversely, support for these measures and services is weaker among high-status groups.

Citizens of post-communist countries generally favour a larger welfare state than people living in Western countries. Some studies have shown that support for the welfare state is stronger among the generations who lived longer under the communist regime and who experienced the initial period of building communism, with them showing greater confidence in some of the regime's goals. Consequently, the authors expected that individuals whose primary political socialisation occurred during various stages of the communist regime (or during the later years of the interwar period and World War II) would differ from later cohorts in their attitudes towards the welfare state. Although descriptive analyses indicate some significant generational differences in aggregate attitudes towards specific dimensions of the welfare state, when age is controlled for the generational effects on most of the attitudes analysed disappear. Slight differences between generations were observed for some attitudes in a cohort analysis that simultaneously modelled the effects of age, data collection period, and birth cohort (i.e. generational membership). Specifically, the differences between the generations that grew up in the first half of the communist regime and the generation that was socialised in the democratic regime amounted to around 10 per cent of the range of the scale measuring attitudes towards state responsibility for the universal provision of services and 5 per cent of the range of the scale measuring attitudes towards income redistribution and progressive taxation. Generational differences were not observed in relation to other attitudes.

Attitudes towards the welfare state may also be influenced by whether people feel there is widespread corruption in society and whether they have personal experience with public officials engaging in corrupt behaviour. Corruption is a phenomenon that undermines the impartiality of rules and procedures. Corruption also implies that public resources are being spent inefficiently. Support for redistribution or support for various social programmes and services (such as health care, pensions, and education) may thus be lower if the public is convinced that corruption is widespread among political elites and public officials. In other words, why should citizens agree to higher taxes and transfers if they believe that a significant portion of public money is going to be lost in corruption networks? Nevertheless, the findings of our analyses regarding corruption are ambiguous. In most cases, both the perception of corruption and personal experience with corruption do not affect attitudes towards the welfare state. Where a connection exists, it is weak, and it does not always confirm the above expectations.

Attitudes towards the welfare state typically influence voting behaviour. During the 1990s,  associations between socio-economic status and support for regulatory measures were identified and these associations were further found to be linked to electoral behaviour: the more educated and high-income groups of the population took a negative view of the welfare state and were also more likely to vote for a right-wing party. The second decade of the 21st century witnessed significant changes in the Czech political system as the socio-economic (left-right) conflict became less salient and  cultural issues (migration, European integration) and corruption gained primacy. Chapters 8 and 9 therefore analyse the question of whether attitudes towards the welfare state influence party choice and whether the effect of attitudes on this has strengthened over time.

The analyses presented in this book show that the link between attitudes towards the welfare state and a person’s left-right political orientation gradually decreased from 1996 to 2016. The weakening of this link means that attitudes towards the welfare state have become less tied to left-right self-placement on the political scale and socio-economic status. Surprisingly, this trend arose amidst very stable support for the welfare state between 1996 and 2016. Other analyses have also revealed that the connection between attitudes towards the welfare state and voting for a specific party is gradually weakening. This is because of the decline in electoral support for the parties that have (traditionally) assigned importance to issues related to the welfare state, redistribution, and inequalities (emphasising these issues in manifestos and policy proposals). Although previous research had pointed to the growing importance of social class in party choice (e.g. Linek and Lyons 2013; Matějů 2000; Smith and Matějů 2011), this link between class and electoral behaviour is not connected to welfare state attitudes and support for redistribution. The class conditionality of party choice is thus likely to be caused by other factors.

The book is available. Read the interview about the new book with both main authors Lukáš Linek and Ivan Petrúšek (Czech language only).