Poverty in the Czech Republic. A Critical Look at EU Indicators. 2020 Update of Tables and Figures 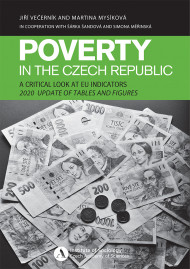 In 2015 and 2016, we published a study entitled “POVERTY IN THE CZECH REPUBLIC. A Critical Look at EU Indicators”, first in Czech (2015) and later in English (2016). The study aimed to provide a critical look at the design of poverty indicators, considering the frequency of their use and their political significance.

Though we used various data sources, the main source was the representative statistical survey carried out under the supervision of Eurostat, the European Union Statistics on Income and Living Conditions (EU-SILC). Using it, we analysed sets of persons defined by the characteristics of their households and weighting adapted to the Czech population, or the populations of EU states.

The study was organized as follows: First we scrutinised EU poverty indicators, particularly evaluating whether there had been an underestimation of household incomes in surveys. Second, we compared poverty indicators with household reports on how sufficient their income
was to cover household expenses. Third, we used longitudinal data from the EU-SILC survey to study the duration of poverty and specific EU-SILC modules on inter-generational transmission of disadvantages, considering how people perceive changes from their economic situation in their teen years in relation to their current adult status. Finally, we situated the data on the Czech Republic into the Central-European context and pointed to some gaps in our knowledge. The Appendix presents main poverty and related indicators for all “SILC” European countries.

In the original publication, our evidence ended in 2014. Because some shifts have occurred since this time, we have decided to update the Tables and Figures to 2018 (and 2019 where possible). We do not comment on the updated data, we simply offer it for the reader’s own consideration. The structure of the original publication is preserved, and the Tables and Figures maintain their original numbering and order.

Project:
Methodology and reality of poverty: Czech Republic in the European context
Share this page