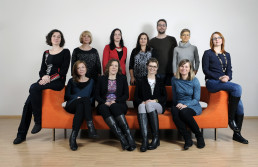 The Gender & Sociology Research Department is the key research institution  in the Czech Republic specialising in gender studies and feminist theory and methodology. The department publishes the transdisciplinary journal Gender and Research devoted to gender studies and feminist theory. The department’s members belong to expert networks in Europe and provide consultation on gender-equality issues. They work with international research organisations and teach at Czech and international universities. The department is an institutional member of the Czech Women’s Lobby through which it cooperates with many non-governmental organisations. The department’s members are also members of the Czech Chamber of Experts on Gender.

Gender a výzkum / Gender and Research is a peer-reviewed transdisciplinary journal of gender studies and feminist theory. The journal publishes articles in Czech or English with gender or feminist perspective in the fields of sociology, philosophy, political science, cultural studies, and other branches of the social sciences and humanities.

The journal also publishes interviews with leading scholars such as Arlie R. Hochschild, Michael Burawoy, Evelyn Nakano Glenn, Ann Snitow, Liisa Husu, Joan Tronto, Jeff Hearn, Raewyn Connell, and others. In thematic issues the journal has also opened up expert debates on such issues as the feminist reflection of globalisation, gender and crisis, care, the life course, gender in an academic environment, men and masculinities, transnational feminism, and bodily rights in feminist research

The journal has an international Editorial Board and is cited in the leading academic databases, such as SCOPUS, ERIH PLUS, Central European Journal of Social Sciences and Humanities, and other databases. The journal is published biannually in a Czech-English version in print and online at www.genderonline.cz . Until 2016, the journal was published under the name Gender, rovné příležitosti, výzkum / Gender and Research.

Gender and the Labour Market

The department studies the social processes that shape the gender structure of the labour market and the sources, mechanisms, and types of gender inequalities, also analysing welfare state policies in this context. Research from the perspective of social inclusion seeks to identify marginalised groups of the population and their living conditions. Related research topics in this area include flexibility, work/life balance, the gender wage gap, the gender segregation of the labour market and precarisation of employment, and gender in organisations, management and entrepreneurship.

The Sociology of Private Life

Private and family life issues are studied in relation to individualisation processes, labour-market transformations, and changes in family and other social policies. The impacts of these processes are analysed along with changes to the way people organise their private life and, in particular, changing forms of intimacy, partnerships, and parenthood. A special focus is placed on the issues of childlessness, fatherhood and motherhood, divorce, partnership and reproductive paths and how they relate to employment paths, female reproductive rights and bodily citizenship, and constructions of gendered identities.

Research focuses on marginalised groups of women and men and on identifying the intersecting social categories that produce specific forms and constellations of disadvantages. Gender inequalities are critically researched in a broader economic and intercultural context and in relation to multiple modernities and global interactions, which confront society with various forms of injustice, inequality and global risks. Furthermore, our research fields include participation and civic activism, as well as criticism of social processes voiced by women’s organisations, the feminist movement, and other social actors.

The Politics of Care

The gendered division of paid work and unpaid care is one of the reference points in criticism of social and gender inequalities. The relationship between paid and unpaid activities is thus studied in reference to historically and culturally changing ideologies and the institutional framings of care at the national and transnational levels. The transformation of care is also researched in relation to transnational care practices and the marginalisation of certain groups in global interactions.